On the road: Me
In the car door cup holder: Noro Silk Garden
On the needles: comfort shawl 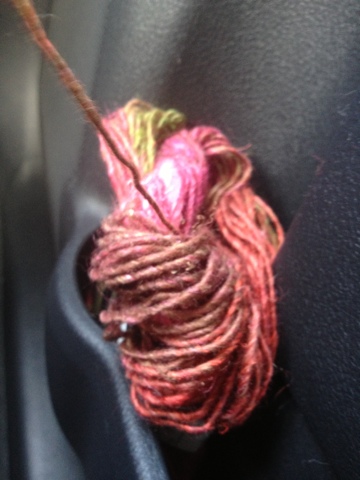 Hey, girl. I do have knitting to show you, but the weather and other circumstances have not cooperated with helping me get good pics. That'll have to wait.

I just wanted to quickly share something one of my friends posted on Facebook. Those of you who were fans of the Handmade Ryan Gosling tumblr will be pleased to learn that Gosling likes knitting in real life! Access Hollywood has the scoop!
at 9:31 PM 1 comment:

Inspired by Claire at Say Yes to Hoboken to make a tassel necklace: 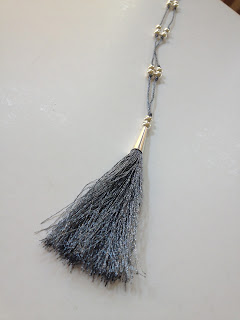 Most of the time, my Pinterest pins are for future inspiration, but every once in awhile, something comes along that says "make me now!" So I did.

The directions were very clear, and I was easily able to get all of the supplies at Michael's. I used DMC floss E317, from the Precious Metal Effects line. I do have a tip for you if you are having a hard time placing the knots just where you want.

Tie a knot around a large needle.

You can then move the needle up and down the length of your string till you get it to the position you want. Then gently withdraw the needle as you tighten the knot. 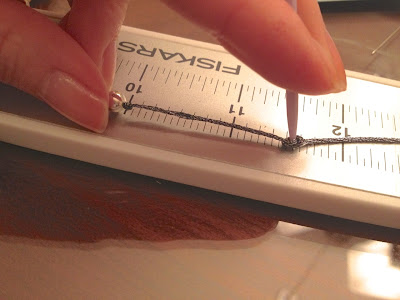 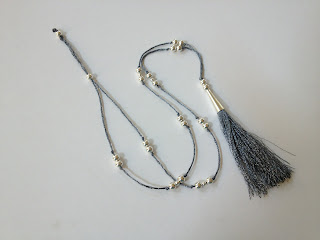 After putting on the beads on either side, I put both pieces of string through 2 final beads. The last bead stays in a fixed position, but the other one can side up and down to adjust the length of the necklace.

Inspired by Sarah to make a scarf hanger: 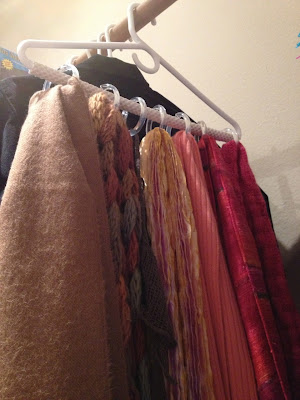 You've probably already seen this idea all over Pinterest. It was appealing to me because it's so modular. I love to sort clothing and accessories by color so that they're easier to find, and I loved the fact that you could add a shower curtain ring anywhere on the hanger without having to shift other things around. As soon as I saw it about a year ago, I put my scarves onto shower curtain rings and put them on a hanger.

The problem, though, was that no matter how hard I tried to keep things evenly distributed, the rings would slip and slide all over, and all the weight would eventually shift to one side, causing the hanger to be lopsided. If you know me at all, you'd know this would irk me! It was actually a little better when there were more scarves on the hanger, but still... 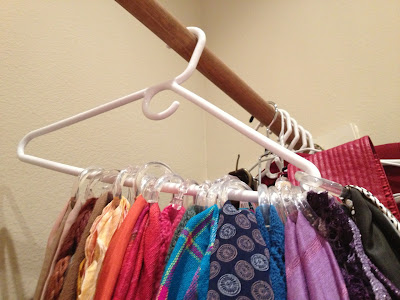 In re-organizing my closet this week, I decided I'd search for other solutions. I love the idea of installing towel bars to hang the scarves, but I didn't have a good space that would work. I looked at various scarf organizers online and then made a trip to the Container Store to evaluate all the ones they had. With some of the commercially available scarf organizers, it was hard to get out one scarf without disturbing the others, or else there was a lot of overlap and things got bulky. Plus, none of them were modular. So I had another look at the hanger + shower curtain ring idea. I tried a wooden hanger, and it was less slippery, but the rings would still slide around. Plus, it wouldn't match the rest of my plastic white hangers, LOL! I didn't want to glue the rings down or put them in fixed positions because then I'd lose some flexibility. So I cut up some foam shelf liner and hot glued it around my hanger. I had the shelf liner on hand already, but I'm sure that felt, fleece, or some other non-slippery fabric would work well. 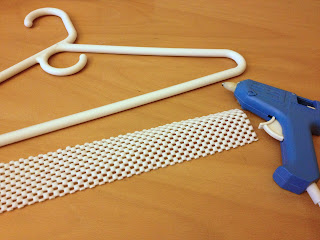 Now everything stays neat without slipping around, even when there are very few things on the hanger. 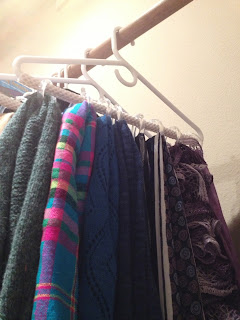 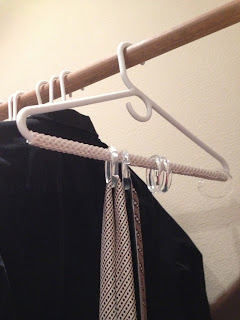 I like this so much that I'm hanging my belts this way too. I just orient the ring so that the prong points up and leave it open so that it's easier to get the belt on and off. 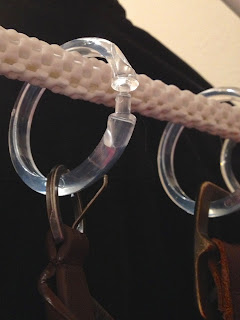 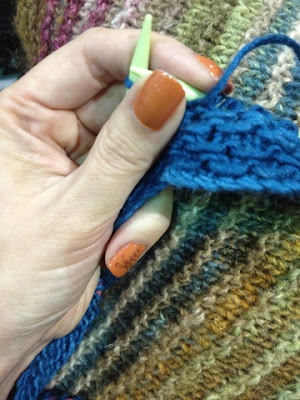 On the needles: Honey Cowl
On me: Lanesplitter skirt
On the nails: Santa Fe by RBL, and my first Konad stamp (M7) on the ring finger
at 10:21 AM 8 comments: